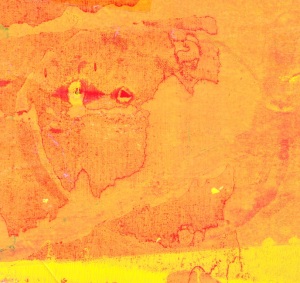 GLISTENING EXAMPLES is proud to present “leave/trace” (GLEX-1301), the vinyl debut of Grisha Shakhnes.
Formerly operating under the name of Mites, Shakhnes has been recording and performing in Tel Avi, Israel since 2008. His work has been issued both privately in limited handmade CD-R editions, and internationally though Alamut Records (Jerusalem), Mystery Sea (Belgium), and Copy For Your Records (NYC). Consider ‘leave/trace’ a graduation ceremony, as Shakhnes steps away from pseudonymity and into the bright lights of his own exceptional music.

Never overly literal, “leave/trace” instead allows the listener to find their own way through its compositions, granting rich reward for those willing to make the journey.

“This is unquestionably Grisha’s most convincing statement to date, and one which cements him in the frontline of artists to watch as the year unfolds. A fabulous LP.”
– Graham Lambkin, KYE Records

“leave/trace” is a beautiful LP, published in an edition of 500 copies.
The first 100 copies of this record are pressed in fresh virgin blood vinyl and only available via direct mail order through Glistening Examples.