Jason Lescalleet – To The Teeth

Posted by lescalleet on August 26, 2016
Posted in: Uncategorized. Leave a comment 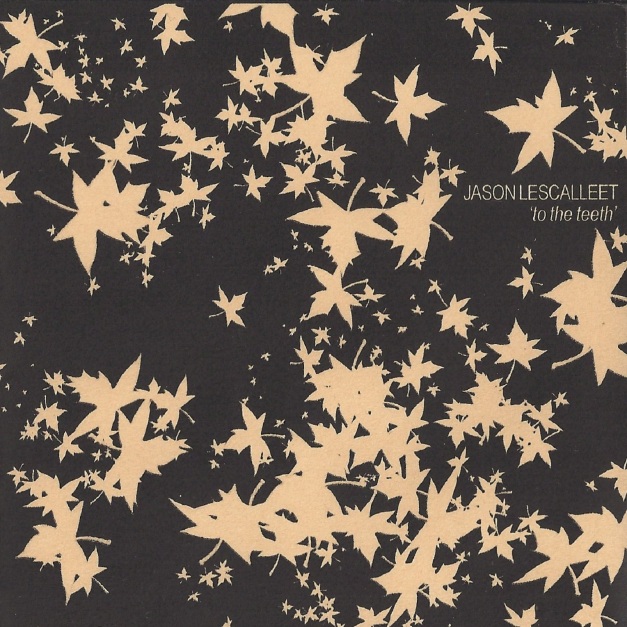 Originally published in 2005 on Campbell Kneale’s seminal Celebrate Psi Phenomenon label in Lower Hutt, New Zealand, alongside albums by stalwarts of the scene such as MSBR, Bruce Russel, Lugosi, Pumice, Artificial Memory Trace, Ashtray Navigations, Reynols, Sandoz Lab Technicians, Kemialliset Ystävät, and Kneale’s own outfits such as Black-Boned Angel and Birchville Cat Motel. This album has been out of print for ten years

“I saw Jason perform in concert once. It was a baffling display. Screeds of Ampex400 trailing their way around the venue, coiling around man and beast like a ravenous bramble. Sloughing and wheezing its micro-things like so much dandruff after you’ve had your head shaved. The merciless click-clock, click-clock of spools keeping time in my imagination even though the withering volume had long-since obliterated my ability to hear what I was seeing. I was bamboozled and charmed .
‘Dear Mr Lescalleet, would you consider unravelling a spool or two for my little Celebrate Psi Phenomemon label? Wouldya? Wouldya?’
…and with that, “To The Teeth” was conceived and squeezed out into this hateful world as a home-burned CD-R, swaddled in Celebrate Psi Phenomenon wallpaper packaging. Huzzah!

To these blitzkrieg-hardened ears, time has not worn down the prickles at the end of this stick. The whooshy hums that herald the opening moments slowly and inexorably give way to salvos of an altogether different species… a compelling narrative of arcs and eternal-crescendos There are glibbering cliches written to give language to these sounds…
‘glacial’,… ‘ecstatic’,… ‘transcendent’… PAH!
“To The Teeth” is like an avalanche of small windowless buildings. Terrifying to behold, it shrinks us down to a weensy-little microworld where the seemingly featureless tape itself is re-imagined as a towering landscape, replete with near untraversable mountain ranges of magnetica, blown hither and thither in howling gales of the almighty, electrically-charged, everything of godawful NOISE.

I still don’t know how he made this. I don’t want to know, I’m easily frightened.

Recently remastered from the original recordings and presented now for streaming and downloading as well as a jewel-cased hard copy, utilizing Campbell’s original and unique package design.